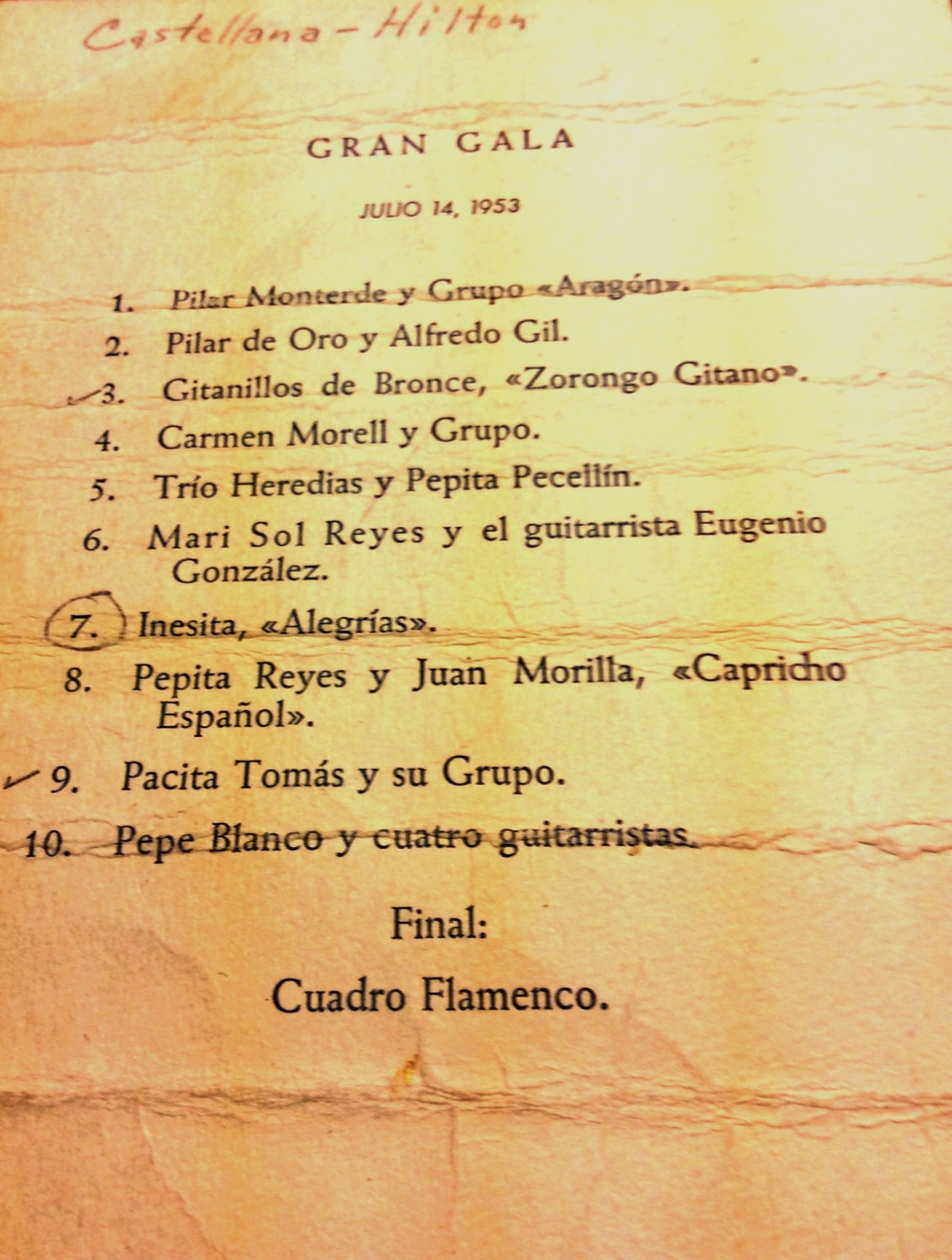 Classes with the Pericet School

During the summer of 1953 in Madrid, I had the opportunity to study an older form of Spanish Dance.  In her correspondence, Dolores Fernandez gave me the address of the studio, in the old quarter of the city. (I was in constant touch with Dolores by letter while in Europe. She was eager to advise me on how to pursue my studies.)

In this time of the year, the only teacher available was Conchita, a name derived from Concepción. She was a pleasant person and knew her dances very well. Although heavy, she moved fluidly and I could see she was pleased by my dancing. I had some familiarity with many of the dance figures.  Among the dances I learned were Sevillanas Boleras, Ole de la Curra and one other theatre dance known as Polo of Breton. The lessons were only one half hour and very reasonable in those days.  They were private sessions, as were the classes with El Estampio and Regla Ortega. Since studying in Spain was on a daily basis, it was an all day regime similar to attending school. This was discipline I needed.

During the stay in Madrid, I was contacted by a gentleman who was in charge of festivities related to the opening of the Castellana- Hilton Hotel which was being built on the Paseo del Castellana. A celebration of four days was planned. For this event artists from Spain and the United States were contacted to perform during the grand opening and I was one of those selected as I was a featured dancer in the Bob Hope film and an obvious tie-in to the partnership effected between the United States and Spain.

I was invited not only to perform but as a guest at dinner. I rented an evening gown for the occasion. They also provided me with a guitarist, one Eugenio Gonzalez. He was a mature man and very pleasant and I rehearsed an Alegrias with him. As it turned out being both a special guest and one of the artists, I was seated at a table for dinner with a journalist from Life Magazine. The event of the opening or inauguration of the Castellana- Hilton Hotel was heavily covered by the press. I performed the Alegrias with the guitarist Eugenio Gonzalez and the festivities went on for four days.

During the rehearsals, I observed an incident which surprised me. A huge table with refreshments in the hotel lobby was laid out for the performers. A group of genuine gypsies I had seen in cafes and in other locales around Madrid sat at the table with Gonzalez and myself. As the platter was a distance from the gypsies, they could not reach the food. Gonzalez appeared rude to them and indicated they try to reach the sandwiches without help. It was an awkward moment. He seemed angry. I do not know if he had some special grievance with them or contempt for them in general. It seemed odd to me, as the music he played was theirs in effect. I found his behavior unexpected.