Commentary on a You Tube Reply 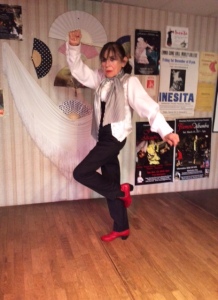 In response to the writer of a recent reply addressed to Inesita on YouTube I wish to clarify some points that are brought up in his very flattering comment on my performance.

I did post an immediate reply thanking the writer for his praise of my work.

In setting the record straight I want to point out that film and video are  entirely different mediums than a live performance in a theater or concert hall or even a club or bar. The making of a dance in film is a process which includes much technology: recording, camera angles, and editing, etc.

I differed with the writer ( whom I am sure is sincere in this commentary) regarding a comparison with the actress, Arlene Dahl. She was a wonderful actress and did a very fine and competent job of her role. Of course she is not a dancer and certainly did not appear “clumsy” playing her part. I also want to point out that dancers are not athletes. The training required to achieve the necessary technique to perform Flamenco dance or any dance discipline is arduous requiring years of study and practice!

The rehearsal of the entire sequence I was involved in took five weeks of shooting, recording and other aspects of movie making. The dance I did was a Farruca, a genuine example of this male style. It contained about nine minutes of material from which Nick Castle, (the marvelous dance director who was responsible for the entire production) selected what he needed from me to fit in to a one minute and twenty-two seconds sequence. The original dance was full length. I had performed this number many times and I was quite familiar with all the elements. The weeks of time spent on the set at Paramount Studios were concerned with the process of film making.

Also, the “pirouettes” I did were of course, Spanish “Vueltas”  or turns out of the vocabulary of Spanish dance.

The gorgeous costume was created by Edith Head, a famous film designer of that era. Amusingly enough this creation had to have on hand two copies of the trousers, three hats, and two pairs of shoes in order to insure that in case of damage there was back up!

All in all I do appreciate these unexpected and very wonderful compliments from the public who have seen the film. It is an honor I treasure. Thank You

The reply from the writer mentioned above: He used the name Flautroy.

“Inesita. Wow. You were fantastic. As a matter of fact, I think you stole that whole first act. You were so good that I stopped the movie and tried to look you up on Google, I saw that short YouTube clip of you doing the Flamenco It was fantastic, You were the best part of the first act of the Movie. Couldn’t believe how fantastic your were. Arlene Dahl looked positively clumsy in comparison to your talent, You are a marvelous athlete. Can you tell us how much you had to rehearse  to get that number down pat? People do not realize how difficult musicals can be and the amount of athleticism and talent that is required. because you make it look  so easy. The fitness level of you actors in musicals is just amazing. That is one of the finest musical numbers that I have ever seen. And the pirouettes. So perfectly executed  and balanced. I was  shocked at how good your were.  and your incredible timing. Your costume was excellent as well. What a fantastic performance!”