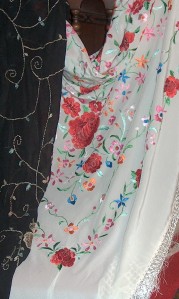 Born in New York City, Yorkville, Inesita moved with her parents to Los Angeles at age 13, where she was drawn to Spanish dance and Flamenco, due to its elegance and complexity of rhythms. Further studies took her to Mexico city and inevitably to Spain.

Inesita’s background in both music and dance makes her an extraordinary artist with a width, breadth, scope and understanding that is rarely seen. Her gifts have moved audiences in Europe, Mexico and The United States.

Flamenco, or Cante Jondo, ( Deep Song ), as it is known to its exponents, is a non-verbal expression in music, song, and dance. It reflects a “tragic sense of life.” Flamenco comes to us from the province of Andalucía in the south of Spain. The music has a structure and form, in addition to emotional content that identifies with aspects of the seasonal pattern of renewal in Nature. It does not speak in specific ways, but in a broad universal sense.

Because Flamenco is unwritten, it is open-ended; therefore the dancer pilots the guitarist into an interplay of syncopated and crossing rhythms. The score is written as the dance proceeds. It is a logical and mathematical system. The dancer in Flamenco is both possessed and in possession of the rhythm which dominates the fabric of the music.

To learn more about Flamenco and Spanish Dance contact Inesita via email.